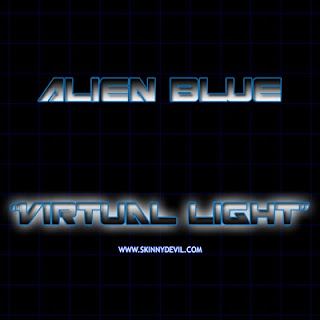 "Cool Cat" - that's the third song from Alien Blue's new CD "Virtual Light" and one we've been playing for a while now.

Basically, this song is all vocal with just a backing bass line and some finger snaps. Blue wrote all the lyrics and does an amazing vocal performance. We slapped a bit of echo in the mix and then left it alone.

The song features the same approach as "Desperation" from the debut Alien Blue disc "An Alien Blue". Namely, the acoustic guitar mimics the sound of an up-right bass playing a cool blues line is classic old jazz style (1930s minimalist style, which often featured just bass, small drum kit, and piano) by using the pinky to mute at the bridge and thumping the string with the index finger. I often add a bit of sliding my fingers across the sound board to mimic the brushes across a snare, but not on the recording, though the thump approach allows for my finger to lightly smack the body of the guitar to help the beat along.

Most folks are familiar with the style we mimic here thru songs like "My Funny Valentine" (cool descending chromatic line), "Summertime" (many people have heard Janis Joplins' late 1960s rendition), and a host of "cool jazz" approaches to standard torch songs....especially the song "Do Right" heard in the 1988 classic film "Who Framed Roger Rabbit?".

Compositionally, I decided to expand on a "2 against 3" idea only moderately employed on "Desperation". This is the "aural magic trick" I refer to in the live shows. The bass line seems to veer off time, but then lands safely back on the one. What you hear is 3 pulses of the bass line for every 2 beats, yielding a somewhat hypnotic effect that I much enjoy.

I hope YOU enjoy it, too!

"He was the coolest cat that I've ever seen..."

http://www.skinnydevil.com/Cool%20Cat.mp3
Posted by Skinny Devil at 8:11 AM No comments:

This one started out as a blues riff I was playing with that I decided to shift into the Phrygian mode (3rd mode of the major scale: 1 b2 b3 4 5 b6 b7) to see what that particular meat grinder would do to it. Turned out I liked it. I also add (due to the blues angle) the b5, so the scale often alludes to Locrian.

So I'm jamming away on it and I think of my buddy Greg Francis. Greg, for those who don't know him, was the center of the project "Pharoah" which then morphed into "Akhanon". Most know him from his later work as bassist/vocalist for Beholder. Greg's solo music often featured phrygian flavors (he went the Egyptian rather than Spanish route).

Anyway, that led me to think of his lyrical work as well as literary work. Greg used various themes, but he often used the "past, present, future" - hence the symmetry of reference from verse to verse (v-1 past, v-2 present, v-3 future) in "Virtual Light" (lyrics below).

It also led me to place each verse in a different octave. The song is in F#m phrygian (the b5 notwithstanding), which allows for some demanding low notes. I opted to use my natural voice rather than the "fry" or "burn" range for the first verse; natural voice for the second (as it falls easily there); then rejected the falsetto option and stayed again with my natural range for the final verse, making this a VERY demanding piece to sing.

I took this to Blue, who added some incredibly flowing but sophisticated harmonies & some cool percussion that, in my opinion, really pull the song together - especially her execution of the repeated vocal theme before each verse (tipping the hat to Plant) and the ghost vocals in the bridge - taking it from a conceptually interesting but not altogether listenable song to one of our funnest songs to play in the live set.

Performance note: Coming out of the bridge I hold a vocal note that last for about 15 seconds, which is impressive only until you realize that Blue begins a breath at the opening of the bridge, through all her melodies, and lasts until the end: 23 seconds!!!

"Desert silence in this labyrinth of sand
as we carve our personal history in stone.
Starlight, stone cuts skin, and design reveals the hand
that seals a promise to never be alone.

Urban silence in this labyrinth of steel
as we spray our history upon the wall.
Electric light, ink cuts skin, a design of perfect will
seals our promise that we'll never be alone.

Digital silence in this labyrinth of mind
as we carve our history in silicone.
Virtual light cuts skin, and the hand reveals design
and we realize that we can never be alone.

Listen to it HERE!
Posted by Skinny Devil at 5:49 AM No comments: 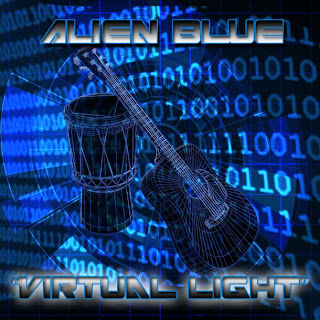 Due to questions regarding the inspiration for the new Alien Blue CD "Virtual Light", we decided to do a "Song of the Week" feature, where we'll make some of the inspirations, concepts, & lyrics of each song available. So, without further ado...

The title of the new CD is "Virtual Light". The term was coined by Stephen Beck and is also the title of William Gibson's 4th novel (Gibson, by the by, is the man who invented the term "Cyberspace" and kicked off the entire Cyber-punk movement). More on this later, but you might wanna read it!

"Welcome to the Show" (2:45) is the first song on the new CD. It opens with an open Asus2 chord and then, as the percussion comes in, weaves thru a couple of "middle eastern" scales: The primary theme is based on 2 scales playing simultaneously, depending on whether the vertical structure is based on an interval of a major 3 or a perfect 5. They are 1 b2 3 4 5 6 b7 and 1 b2 3 4 5 b6 7. It is not properly bi-tonal in the traditional sense, but it does provide an exotic mood.

It is also a tip of the hat to Trent Reznor (9 Inch Nails) quoting his riff in the song "Wish" from their 2nd album.

The rhythm is a straight 4 and this is because we open with the song live, bringing the audience in to help with percussion from the get-go, hopefully destroying (to varying degrees) the 4th wall inherent in any stage performance.

The "4th wall" is the line between audience and performer.

We explicitly mention this wall in the lyrics:

"Hello - welcome to the show
(come join us) we've got miles to go
No 4th wall, we want you to play
come join our parade"

The ghosty harmony vocals only mildly reference the debut Alien Blue CD "An Alien Blue" and take the listener into an entirely new direction that is featured throughout the CD.....

Give it a listen: Welcome to the Show
Posted by Skinny Devil at 6:48 AM No comments: