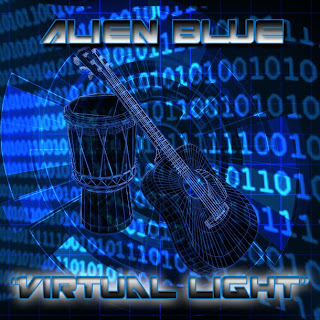 "Imagine We" clocks in at 4:41 and is chock full of guitar mayhem hidden within it's mellow exterior.

Today, I mostly want to talk about compositional ideas....

Borrowing from a common melodic theme heard in dozens of songs sung over a simply Cmaj7 to Am7 change, followed by a 2nd section that replaces the C with an F add9 (the F doesn't properly replace the C until you add the maj 7 and the add9, then you get out of the box, which creates some interesting opportunities for the melody). The F add9 then expands to add the mj7 & #11 for extra spice.

Then comes the twist: a modulation to F#m (using the4 same 2 chord pattern, this time F#m add9 to E add9) that pivots off the A note in both Am7 & F#m. The F# expands using the same open E & B to an F#m11, with the E & B notes common to the Eadd9. This allows a pivot back to the original key using, again, the E & B that are also common to the Cmaj7.

Several more things then rear up: the same bridge that we saw in "That You're Gone" and "Ragamuffin Voodoo" re-appears (again, in a new context) and the stage is set using some mean guitar runs that occur later on the CD in other songs, for more self-referencing tie-ins on "Virtual Light".

I wonder how many more YOU can find? We haven't even mentioned the lyrics yet, or melodic themes.

Yes, "Virtual Light" is becoming quite the musical puzzle....

Enjoy!
Posted by Skinny Devil at 8:35 AM No comments:

Song of the Week #6 - "Ragmuffin Voodoo"

The song kicks off with a vocal riff (me) followed immediately by a second vocal (Blue) singing a haunting opposing line. This second vocal, if it sounds familiar, is a direct reference to the title track, "Virtual Light". The guitar comes in and doubles vocal, then adds some cool percussive effects.

The verses feature some fun vocal harmonies and the chorus sneaks in some wicked & challenging guitar licks scattered about the main riff.

One really fun tid-bit is the guitar referencing the vocal:

"Draw your line in the sand
Strange design, stranger hand
Drop the 5 and raise the 4..."

After which the guitar plays a standard blues lick that features the tri-tone - the lick slides up 1/2 step from the 4th scale degree to the sharp 4 (or flat 5). "Diabolus in Musica" is Latin for "the devil in music" or simply "devil music", which I thought was a witty tie-in to both our general blues style (blues used to be known as devil music) and to the song title "Ragamuffin Voodoo".

The bridge is a common theme in many of the songs on "Virtual Light", starting with last week's entry, "That You're Gone", only this time the context is completely different. The context in "Gone" is the relative minor to the songs key of E major, while in "Voodoo" it comes as a clear modulation away from the Em (G) context, but the final B chord is the dom5, leading back to Em (as the dom7 chord allows a return to either a major or minor tonality).

Here it is: http://www.skinnydevil.com/Ragamuffin Voodoo.mp3
Posted by Skinny Devil at 7:02 AM No comments:

This song came about while I was jamming. Just goofing off by myself using that classic Hendrix R&B chord-melody style that Jimi developed by expanding on the ideas put forth by Ike Turner, Curtis Mayfield, Steve Cropper, and others. After Hendrix used this in songs like "Castles Made of Sand" and "Little Wing" the idea was picked up by others (you've heard it in songs by RHCP, Pearl Jam, Steve Vai, & more).

So anyway, I'm toying with a 6/8 groove in E (E F# G# A B C# D#) using a I IV V and then started spicing it up (I get bored easily!), so I added the chromaticism by dropping in the D for the mixo-feel, then took the 4 chord from major to minor. The underlying progression then became:

The bridge also features some chromaticism, due solely because I love to listen to Blue harmonize with more complex harmonic options. I can never guess what she'll do, but I'm very selfish in that I want to enjoy the unique lines she draws in the sand. So I took a theme that is in many of the song bridges on "Virtual Light" (more on this later): C#m to B to A, which became C#m B Bm A cycled several times (w/ sus2 embellishments) and ended with the return to the A to Am that resolves back to E. Note the chromatic line is identical to the first section.

Then we get to the 3rd and final section of the song where I employ open string chords and both Blue and I really open up vocally with a choir-esque sing-along sort of thing. From live performances we started extending several notes until it became sort of a contest to see who could hold the longest note (she usually wins), but she opted to take a more support role during this section, so I opened up with a long-held note that turned out to be 37 seconds on the recording. Probably the longest single note I've ever held, though not as long as notes I've heard Blue hold!

Too bad this isn't a hit song or we'd hold a world record for longest note - a mark currently held by Morten Hacket of a-ha in their song "Summer Moved On" at 20.2 seconds.

The lyrics deal with the grieving cycle and how we step not just from loss to acceptance, but from grief to celebration, exemplified by the last 3 lines of each section:

The final section is meant for you to sing along. No words, just a simple melody, so put it on, turn it up, listen....and sing!

That You're Gone MP3
Posted by Skinny Devil at 6:39 AM No comments:

Song of the Week # 4 - "harmonica interlude" 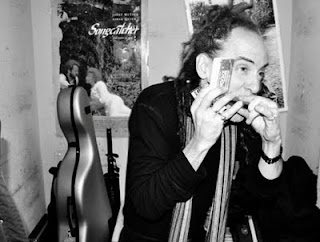 Less a song and more just me jamming on harmonica using a classic blues theme (G mixolydian blues using the draw 2 position of a garden variety C harp) for about a minute - hence the term "interlude".

This one is simple & pure improv: I start playing, add a bit of Blue's impromptu vocals in the background, and an egg shaker playing along. Pure unadulterated fun!


note: The photo is from February 2009 back-stage at the KY Theater when I was supporting Lori Lieberman.
Posted by Skinny Devil at 7:09 AM No comments: 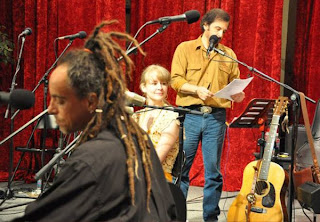 "Long is the road, and hard, that out of Hell leads up to the light." (Milton)

I have both personal challenges AND professional challenges for the month of October. Care to join me for the ride? Set your own challenges, keep us up-dated, and even jump on board as part of the team!

What is YOUR lifestyle challenge for October???

I publicly revealed in late 2008 that I was going to shift my focus to include more live performance and then get a new Alien Blue CD written & released. 2009, so far, has seen the release of "Virtual Light" and has seen Alien Blue on a 7-state summer tour. In addition, I've played Woodsongs 9 times (7 times backing host Michael Johnathon, once backing Almira Fawn, and once backing Lori Lieberman) and Alien Blue opened for Muriel Anderson.

2010 goals include higher profile gigs for Alien Blue, doing workshops & clinics again (I haven't done those in a few years), and - with a little luck - at least one jaunt that takes us out of the country.

Stay tuned for details as they come...AND let me know if you want to be part of the Skinny Devil Team and make these goals a reality!
Posted by Skinny Devil at 9:41 AM No comments: